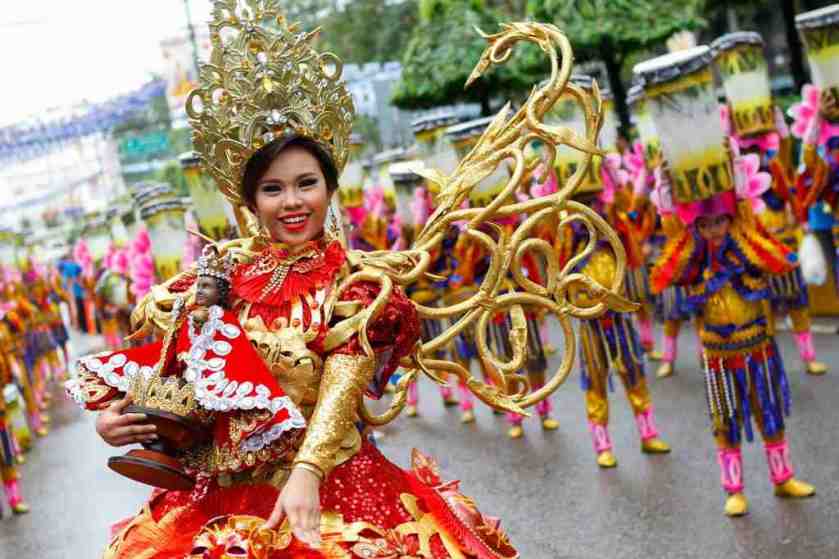 Wow!!! What can I say? Cebuanos really know how to party! With a capital P! No wonder lots of foreigners converge in Cebu City every end of the Christmas season. They go there to extend the holidays, party like there’s no tomorrow, before finally going home – all bushed, broke and bleary-eyed – to their more sedate and proper worlds.

This year’s Sinulog Festival had to compete with the bigger headline which was Pope Francis’ historic visit to the Philippines. This, coupled with the threat of an incoming storm named ‘Amang’, would have affected attendance in the festivities. But no, there was no shortage of crowds; no lack of color, noise and excitement, as Cebu’s Sinulog reaffirmed its position as the premiere festival in the country today. “This is definitely much, much larger than the Mardi Gras in New Orleans”, quipped a wild and woozy Californian I befriended in the streets.

Sinulog is a week-long cultural and religious extravaganza that culminates on the 3rd Sunday of January. It is a commemoration of Cebu’s – and the Philippines’ – acceptance of the Christian faith, with the Santo Nino as the focal point in the people’s baptism to Catholicism. It is said that the festival’s basic dance steps were taken from Queen Juana in the olden times, who danced with the image of the Santo Nino in her arms to ward off evil spirits and all forms of sickness among her people.

This year’s celebrations had a lot of glitzy events – from the procession to the fluvial parade to the re-enactment, even a Sinulog for Kids, etc – but the highlight of it all would have to be the grand street parade last Sunday which lasted practically the entire day. Participants dressed in dazzling, colorful costumes, coming from all over the Philippines, tried to outdance each other to the frenzied beat of native gongs, drums, trumpets and anything else noisy.

And with good reason. The Sinulog Dance Contest, which culminated in the Cebu City Sports Complex, had 3 categories – the Street Dancing Category, the Free Interpretation and the Base Category, with each offering a prize money worth P1 million!

Towards the evening, the much-awaited street dancing followed. As the night sky lit brightly with dazzling fireworks, the streets were covered with a merry combination of booze, good food and great company. Indeed, it was a wild and wonderful way to meet new friends.

Kudos to the Sinulog organizers for a job well done. Way to go, Cebu!!!

Translate my blog to…