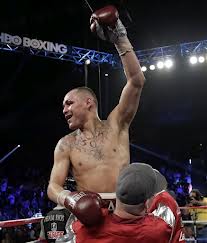 Talk about a non-stop bash-each-other-to-death slugathon!!! If you failed to watch this second episode of the Alvarado-Rios boxing soap opera, you’re not a dyed-in-the-wool boxing fan! This is the present day Arturo Gatti – Mickey Ward classic, folks, and you better watch it to believe it!

Mike Alvarado had lost via 7th round TKO in the first encounter with Brandon Rios last year. That epic encounter turned out to be a serious Fight-of-the-Year candidate, and the clamor for a sequel soon reverberated in the boxing world. Seeing its goldmine potential, Bob Arum wasted no time in arranging the rematch.

Mike Alvarado started cautiously, the TKO loss still clearly on his mind. The brash Brandon stalked Alvie with murder in his eyes from the opening bell. Alvie however refused to be lured into an all-out brawl, using his superior boxing arsenal. In the first as well as the second round, Alvie gets banged up but recovers his senses in time. Towards the end of the 2nd round, he showed that he was willing to clinch in order to survive.

In the 3rd round, it was Alvie’s turn to exact punishment. Brandon was wading in to a flurry of punches, many of them right smack on the button. But he kept wading for more. There seemed to be no stopping the brawling Brandon as he marched forward to the gladiators’ call for blood. This time though, Alvie had wisened up and refused to go toe-to-toe with Brandon.

Alvie knew that he had better chances with more distance. He mixed lateral movement with occasional, yet brief exchanges. They would go back and forth, with Alvie, having learned from his loss, making the better adjustments. Brandon was confident that Alvie would revert to his warrior ‘take-no-prisoners’ approach. Alas, Alvie clearly had a different fight plan and was sticking to it.

Towards the middle rounds, Alvie would continue to spear the raging bull that was Brandon. He would now and then trade punches at close range, but he was boxing more from a distance this time, clearly showing his boxing savvy. Brandon, on the other hand, couldn’t find his rhythm as he tried to lure Alvie to a phone-booth fight similar to their first bout.

In the latter rounds, Brandon tried desperately to cut the ring off, but Alvie still managed to wriggle free, blasting damaging head and body blows in the process. Alvarado, in maintaining that right distance between them, succeeded in finally solving the all-out onslaught from Rios. Like a master matador, Alvie took risks to engage his prey. In and out, back and forth. Stick and dance. Bang it up, then move away. Alvarado was not only surviving, he was clearly winning by sticking to his strategy. And for that, he is now – by unanimous decision – the new WBO super lightweight champion of the world! Long live the new king!!!

Asked about the possibility of a third bout, Alvarado gamely answered: “Brandon gave me a chance to redeem myself.  I’ll give him a shot for the trilogy.” A third bout is definitely in order.