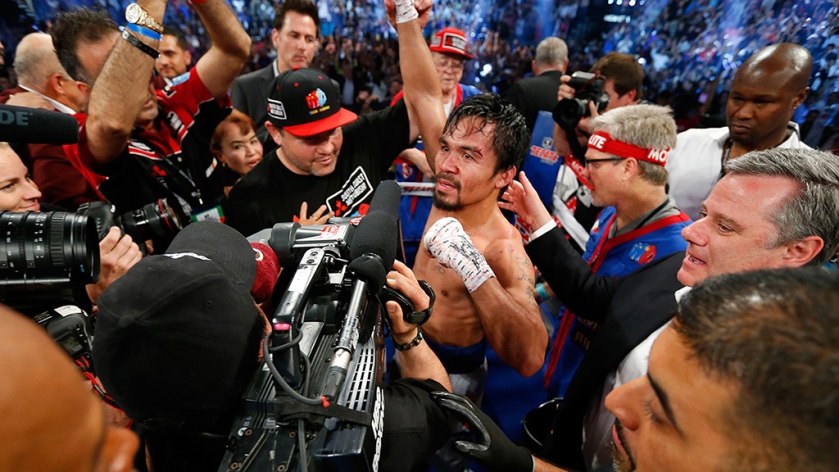 Manny Pacquiao carved out a convincing unanimous decision over the undefeated Timothy Bradley to regain the WBO welterweight crown that was unceremoniously stolen from him two years ago. In dominating this rematch, Manny showed that he still had the trademark speed and power to be on top of the fight game. In the process, he also ensured that his career as a topnotch attraction in the square arena would continue, to the relief of the Pacman fans.

A lot of boxing aficionados had expressed doubts on his ability to come back after the twin debacles he suffered in 2012. First there was that controversial loss to Bradley where almost everyone in the arena saw him winning by a comfortable margin. But more significantly, it was that dreadful one-punch knockout in the hands of Juan Manuel Marquez that fateful December that scared the hell out of even the closest Pacquiao fanatics.  This unanimous win, despite the lack of the hoped-for knockout, was a clear message that the Pacman is back in business. And that the Pacquiao joyride continues.

Pacquiao prepared intensively for this long-overdue rematch. Bradley had obviously gotten bigger, and had acquired more skills and experience with two scintillating wins against a dangerous Ruslan Provodnikov, and Marquez, the proud Pacquiao conqueror himself. Hence, Pacquiao knew he had to reach back and be more aggressive, and build up more stamina for the long haul. And he delivered. But this time, with more deliberate and precise offensive action, with more focus on defense, and with a pace that he had to dictate.

The outcome of the action-packed rematch was actually in doubt in the first four rounds, with Bradley sticking to his old tactics. On display were his counter-punching skills, skills similar though not as good as that of JuanMa Marquez, interspersed by occasional attacks to keep Manny guessing. On the 5th round however, Pacquiao’s pinpoint hits started raining in with laser efficiency. With Manny gaining the upperhand, Bradley abandoned the game plan and tried to employ the Marquez ‘Hail Mary’ punch to try to stop Manny. Unfortunately for him, it just wouldn’t work on a more defensively-driven Pacquiao.

Bradley’s looping swings from left and right field were clearly visible, and Manny was quick to dodge the bombs. “I tried, I really tried,” Bradley said. “I wanted that knockout.” Bradley felt that by winning by knockout, he would not just vindicate his win in the controversial first fight, but more importantly, endear him to the fans who were not too enamored with his lack of knockout power. Even Manny’s coach Freddie Roach commented:  “He (Bradley) threw us a little bit with his style tonight. He was swinging wildly and was going for a one-punch home run.” But Manny wasn’t going to be careless this time.

Manny’s style has now mellowed with time. He no longer mows down an adversary with wild abandon. He is more careful now, and no longer takes unnecessary risks. Instead, he has learned to stalk, observe, bash-and-dash, give-and-go.

Indeed, the writing is on the wall. With age and the mellowing of years come maturity, patience and deliberate action. The young, aggressive, devil-may-care Pacquiao is gone forever. But a new Pacquiao has arrived. And the Pacman joyride is back on the road again.

For more on the Pacquiao-Bradley 2 bout: