May 16, 2019 cbholganza Advocacies, Family and Friends Leave a comment

Sir Dan is an esteemed upperclassman in the Philippine Military Academy (PMA) who provides his observation on the recent Philippine elections. There were winners and losers in this exercise; there were marked differences in opinions; and certainly, heated debates on a wide range of issues. And whether you agree with him or not, there are lessons to be learned here.

The dust should have settled, congratulations extended, concessions rendered. The victors should have expressed gratitude and the losers should have acknowledged defeat. The division because of political leanings should start to mend while words thrown in the heat of battle should have begun to fade. Not in the Philippines.

“The fight continues” bannered one Duterte hater columnist. “Prepare to derail the agenda of the winners and if all the agencies are controlled by the administration, prepare for people power”, said a nun. “It was a sham and a failed political exercise”, said a loser. A teary eyed FB poster lamented: “I will continue to fight for a country I deserve.” The self-proclaimed masters of freedom and academic excellence, the University of the Philippines System, has started a series of protests to condemn the election results. Meanwhile, the bashers are all-out on Bato Dela Rosa’s “I don’t know a thing about legislation, so I will go and study”.

The fight continues, it never ends. The once power-wielders will not give up until they have taken back the reins of Malacanang. Every waking minute must be devoted to driving the duly-elected and most popular incumbent president ever out of office. A day longer that Duterte stays in power means another nail in the coffin of their ambition. There should not be any lull in their malevolent efforts. Otso Diretso, Trillanes, De Liema, the church, the manipulated youth and cause-oriented groups, the dumb politicians are all just disposable means towards their selfish end. There is no sacrifice too great, no cow so sacred. Everything can be used. Use everything.

The 1986 EDSA revolt was roughly 2 million Filipinos imposing their will on the rest of 62 million. It was when the noisy self righteous very much in the minority hijacked governance for themselves and themselves alone. An attitude hammered into their skulls with superiority unmatched. “We are the thinking, decent, educated, intelligent and moral class. We deserve power. And you, the uneducated, the peons, the mangmangs, the amoy pawis, the working sweating mass must bow and pay homage. Because you are not worthy”. Such was their belief passed on to succeeding generations of the elite.

What then is left as the people’s unifying factor? Not geography, not the language, not history, not even the patrimony of the nation. The church? How can the church promote unity when she has taken a partisan stand? The question then is: Is their Unity Necessary?

Democracy is a two bladed sword. It cuts both ways. It can be a blessing or a curse. The malevolent, the selfish I-me-mine power trippers, the insatiable and the corrupt present democracy as the most evil creation of man. The marginalized, the powerless, the poor and the exploited see democracy as the only hope, the ultimate leveling tool.

In the election just passed, the will of the majority must be imposed as written. The nobility or the dishonor of the vote rendered inconsequential by the numbers. It is a system established and adhered to. Unless a new system of choosing public servants comes along. Lest the people opt for blood to decide who rules.

There is hope for those whose candidates won. Finally, they have a voice, a true representation. Things will only get better.

For the losers, the rage burns and eats them alive. Tragically, they imbibe defeat unceasingly and get drunk in its poison and despair, lost in hatred and useless self worth. Pity. Yet, nothing is more well deserved.

Bearing with the heat (The Leaven)

Volunteers give a helping hand. (The Nation)

Patience is a virtue. (Benar News)

Lining up before your precinct. (Philippine Reporter) 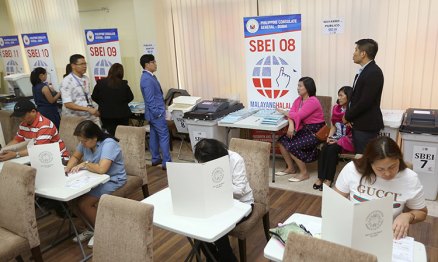 Even our OFWs abroad cast their votes. (Gulf Today)

Our right, our duty to vote. (GMA Network)

Making sure the docs are secure. (Inquirer.net)