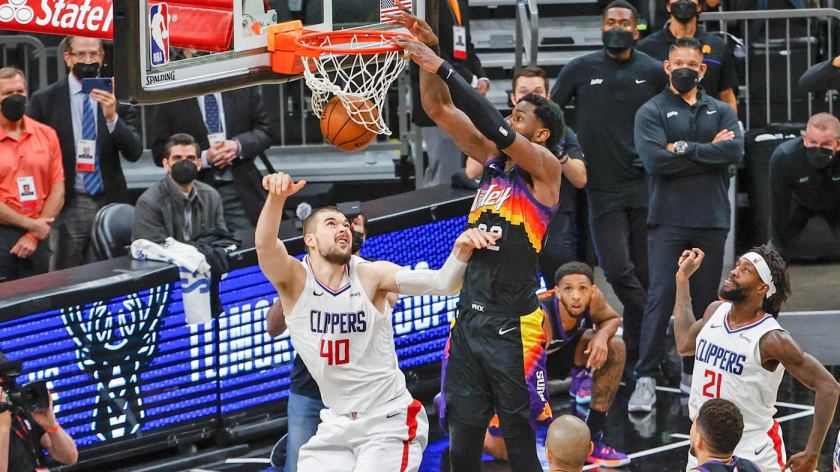 The grueling sudden-death dramas in the east are over. The epic 7-game wars saw the top 2 seeds in the east – the Philadelphia 76ers and the Brooklyn Nets – humbled. We now have a complete cast of characters moving on to the Conference Finals. We are down to just 4 worthy protagonists, folks, survivors all in this crazy playoffs that have brought us so many surprises.

In the west, 2 teams, both of whom have never before tasted the sweet champagne of champions, are matching skills and wits to move up to the Finals. It is the 2nd seed Phoenix Suns vs the 4th seed Los Angeles Clippers; with the Suns currently holding a 2-1 lead as of this writing.

Over in the east, the 3rd seed Milwaukee Bucks are in a tough duel with the 5th seed Atlanta Hawks, with the score all tied up at 1 win apiece. The Bucks are the closest thing we have for a titleholder, having won the crown way back in 1971 with Kareem Abdul Jabbar. The Hawks, then based in St Louis, last took the title way back in 1958. With the traditional basketball powers such as the defending champions LA Lakers, the Boston Celtics, the San Antonio Spurs, and the Golden State Warriors all taking early vacations, it looks like a new breed is all set to take over the NBA.

The Phoenix Suns are favored to win the western shootout, with the veteran Chris Paul directing, Devin Booker scoring, and DeAndre Ayton manning the middle. Paul’s arrival in the team this season has upped the court maturity of this young team in a big way, creating fantastic new options in the offense. But by and large, the team is composed of young, athletic-types like Booker, Ayton, Cameron Payne, Mikal Bridges and Cam Johnson. This team has enough firepower in that line-up to make them very competitive in the years ahead.

But luck has also played a huge part in the team’s march to the conference finals. Down 1-2 against the defending champs LA Lakers in the first round, the series win was handed to them via an unfortunate injury to the Lakers’ Anthony Davis. This, coupled with the fact that Lebron James was also coming from an injury himself, would dim the Lakers chances. The Suns swept the next 3 games, clinching the 1st round win 4-2. In the 2nd round, they faced the Denver Nuggets, who were also without their injured star point guard, Jamal Murray. They swept the Nuggets 4-0, running their winning streak to 7. This time, they are facing the LA Clippers, who will be missing their main man, Kawhi Leonard (knee sprain) and Serge Ibaka (back surgery). They took the first 2 games, before their winning streak was finally halted. The Suns now lead, 2-1. Chris Paul’s veteran leadership, kicking in a higher basketball IQ and more maturity to the team, could be the key to their success.

The Clippers, on the other hand, have had to go through 2 come-from-behind series wins in order to reach the Conference Finals for the first time in their franchise history. They were down 0-2 against the Dallas Mavericks in the first round, before squeezing through, 4-3. Against the West’s top seed, Utah Jazz in the 2nd round, they were down once again 0-2. But despite losing Kawhi Leonard in Game 4, the Clippers turned the series around with timely adjustments from coach Ty Lue, to score another hard-fought 4-2 win.

The twin 0-2 fightbacks have clearly shed off the choker image they acquired from having blown a seemingly won 3-1 lead against the Denver Nuggets last year in the Bubble. This is the 3rd consecutive 0-2 hole they have dug themselves into. But this year’s Clippers are resilient, aggressive and refreshingly innovative. And most of all, they are united. This positive vibes is the main element lacking in last year’s star-studded team that simply underachieved. With Paul George leading the pack, and empowered players Reggie Jackson, Terance Mann, Nicolas Batum, Luke Kennard filling up exceptionally for the absence of Kawhi Leonard and Serge Ibaka, it is a big surprise that this team is still in the running. This time, this collective positivity – nurtured by coach Ty and embodied now by a team that knows no limits to their abilities – could well be their ticket to the Finals and perhaps, the championship.

In the west, it is maturity against positivity, both virtues that are beyond the basic skills we find on the court. Who wins? The team whose collective will is stronger will win it all.

The fight in the east is more a clash of styles. The series is tied at 1-1 as of this writing. The Hawks stole Game 1 by a score of 116-113; while the Bucks dominated Game 2, 125-91. The Bucks have the most dominant player among the surviving teams in the person of former MVP Giannis Antetokounmpo. They are bigger and stronger. They have had years of experience in the playoffs. Their recent playoff losses should be lessons learned on how to counter opposing teams’ plans to contain Giannis. This team is all about bully basketball, with super-athlete Giannis ‘The Greek Freak’ expected to bring them to the promised land.

But the Bucks were also lucky to have reached the Eastern Conference Finals. They were down 0-2 against the prolific, heavily-favored Brooklyn Nets, before an injury to Kyrie Irving crippled the Nets’ chances. They would finally nip the hobbled Nets 4-3, in an epic overtime-of-a-Game 7. With fellow all-star Kris Middleton, and new arrivals Jrue Holiday and PJ Tucker providing more muscle in the hardcourt, they are now the top betting favorites to win the NBA crown.

Facing them are the pint-sized Atlanta Hawks. The Hawks were not in the playoffs last year. They have however overachieved, using speed and guile to reach the Eastern Finals. The Hawks shot down the top-seed Philadelphia 76ers in the semis. For those who love the underdog, the Hawks are a good team to rally behind. They are a brash young team whose confidence went sky-high when the Sixers themselves gave them some slack and allowed them to believe they could compete. This is a David vs Goliath game for them. All they hope for is 1 shot – 1 lucky break – to beat the Buck Goliath.

The Hawks’ pick-and-roll is a great study of variable options and quick decision-making. It is the riddle that the Bucks will need to solve, if they hope to stop the Hawks. For the Hawks, their goal is to stay within distance of the Bucks in each game, and then hopefully be competitive enough to have their fantastic closer, Ice Trae, propel them to victory. Despite Bogdan Bogdanovich’s knee injury, young guys like John Collins and Kevin Huerter are stepping up, making the Hawks unpredictable and dangerous.

For the east, it will be power vs speed; height and might vs guile. But the pressure will be on the heavily-favored Bucks to deliver; while the Hawks are more relaxed, having already overachieved, and simply playing with house-money. Who wins? It is for the Bucks to win. If the Bucks become too complacent, then the Hawks have a proverbial puncher’s chance to win this series.

This year’s playoff has been very unpredictable. And frankly, quite refreshing. With new names hugging the limelight, while the old reliables are bundled out, the 2021 playoff battles is ushering in the NBA’s new norm.

We are down to the Final Four, folks. Place your bets.