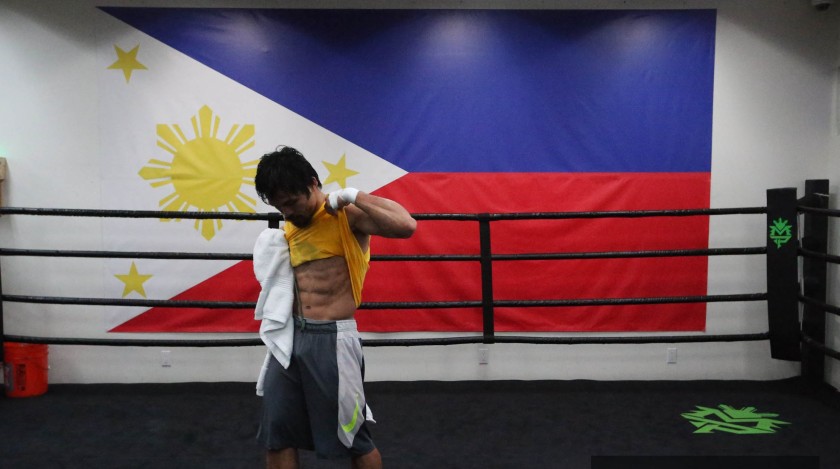 On April 9, or exactly 15 days from now, Manny Pacquiao steps in the ring to do battle for the final time. After a brilliant boxing career that spanned 22 long but rewarding years, after giving and taking a million booms and bangs of hurts and pains, after giving our country more than a decade of pride and glory, Manny Pacquiao is finally set to display his superb skills in the squared arena one last time.

It has been an auspicious 2 decades, not just for Manny, but for the country as well. Manny has almost single-handedly put the country on the global sports map, making our flag and anthem recognizable the world over. With scintillating performances that made him the world’s first and only 8-division world champion, and with 3 Ring and BWAA ‘Fighter of the Year’ Awards; 2 ‘Best Fighter ESPY’ Awards; and the ‘Fighter of the Decade 2000s’; Manny has become not just a celebrity, but an an inspiration to millions, an icon worthy of emulation.

For many, the impending retirement is something to be sad about. Sad in that Manny had always been able to provide us temporary relief from many of our day-to-day problems. His departure will no doubt leave a huge void in the hearts of millions of boxing fans the world over, most especially here in the country. Still, there are those who cling to the hope that Manny will continue to provide us more of his swashbuckling fights – for at least a few more years.

For his family however, his ride into boxing’s glorious sunset is a big relief. Now, they can finally rest easy from the possibility of witnessing another nightmare ending similar to Manny’s last fight with Juan Manuel Marquez. There are many living examples of boxing’s wear-and-tear finally surfacing late in life. There’s the legendary Muhamad Ali, now suffering from Parkinson’s disease. Not far from home, there’s Gensan’s prodigal son, Rolando Navarrette, former world champion and crowd favorite; reduced to begging for Manny’s support. Before Manny’s boxing injuries become truly serious, retiring while ahead is a great insurance.

But there are reports of a waning interest in Manny’s incoming fight with Timothy Bradley. The two had clashed twice before. The first had ended in a controversial split decision win by Bradley; while the second was a vindicating unanimous decision win by Manny. Boxing pundits believe that Bradley is obviously way below Pacquiao’s caliber. Many would have preferred new faces such as the undefeated WBA welter champ, Keith Thurman (26 wins, 22 by KO, no loss, 1 no contest); or the ever-popular British ex-world champ, Amir Khan (31 wins, 19 by KO, 3 losses).

Then, there is the controversial statement Manny dished out against the gay community. This would cause an uproar worldwide, forcing his main sponsor, Nike, to terminate his contract. While Manny had subsequently apologized for the unintended derogatory remark, the damage has been done, Many have expressed their disappointment and dismay over Manny’s statement. And this will not help generate interest in the Pacquiao-Bradley clash.

Finally, there is the issue of the shoulder injury in his last fight with Mayweather. A lot of unknowing fight fans lost money betting on him on that mega-fight with Floyd. Manny had his reasons for keeping mum about the injury, and most fans understood him for pushing through with the fight. But the bottom line remains: not a few felt betrayed and shortchanged by the non-disclosure, and quite a number lost huge sums of cash.

These issues are expected to cause gate receipts to dip a bit. But I believe that true boxing fans will continue to watch the fight in the hope of catching a glimpse of the vintage Pacquiao performance that has thrilled us no end.

Up front, let me say that at the very least, the fight will be far more exciting than the last Mayweather fight. Floyd’s choice, the gentle Andre Berto, pales in comparison to the challenge posed by Tim Bradley. Tim will certainly provide a much more competitive fight for Manny, than Andre did to Floyd.

On top of that, Manny’s shoulder injury is now fully recovered. Reports have it that Manny has been showing great progress as his training reaches its peak. And then, there’s the election fever ongoing. I believe that Manny will try his best to provide us an abbreviated ending. An exciting win will certainly merit much more attention in the country, and Manny knows that this will translate to more votes for his senate aspirations.

Obviously, Manny knows that it was – and is – his dramatic boxing story that catapulted him to national and international recognition. Boxing opened up the inroads to new endeavors, eventually leading to Manny’s new career in politics. His hold on politics however remains unstable, and only time will tell how strong this voter loyalty will last. That said, there remains that tempting desire to milk his boxing career to its fullest.

If Manny is able to provide us a vintage knockout performance, we will surely find him in the halls of the Senate in the years to come. And for those who remain enamored by the magic of his mitts, Manny may just be enticed to push his boxing career a little bit farther. Who knows, we may still see Manny rallying the boxing community in its losing fight against the very aggressive MMA. (But that’s another big story on its own.)