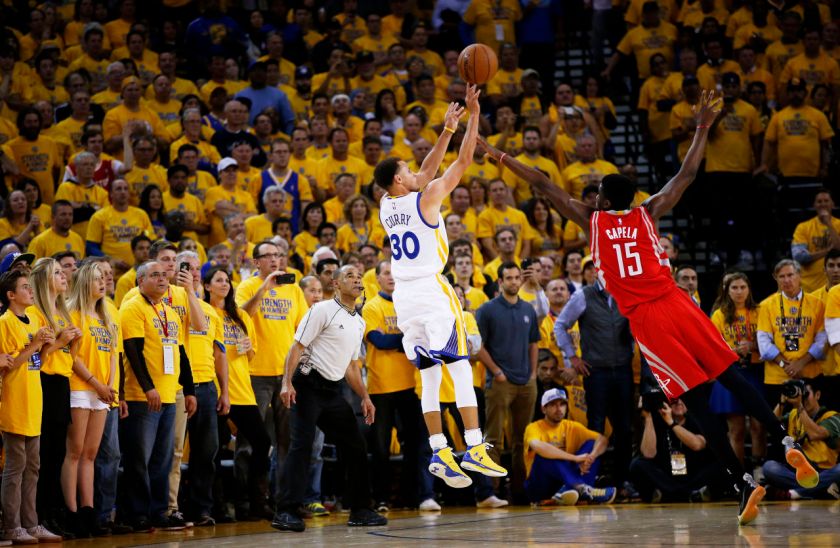 In basketball, it used to be that height trumped everything else. You just needed to have hulking gorillas with no qualms of manhandling meeker mortals to create a superior specimen of a basketball player.

In the early days of pro ball, we had the likes of George Mikan, Bob Petitt, and Dolph Schayes teaching us the big man’s value in the game. The celebrated rivalry between big guys Wilt Chamberlain and Bill Russell stoked more interest in basketball in what were then the glory days of the Bigs. Later, we had the immovable walls Willis Reed and Wes Unseld, Kareem Abdul-Jabbar with his irrepressible sky-hook, the versatile Hakeem Olajuwon, the cerebral David Robinson and the hulking Shaquille O’Neal lording it over the field.

The simple logic there was that the nearer you are to the ring, the higher the shooting percentage. Hence, to this day, traditionalists will insist that priority of plays should be to the shaded area. Mr Goliath receives the ball, he humps and bumps his way in, and then deposits the ball into the ring. If the double-team sets in, then he looks for the open man outside. Easy as pie.

Well, not anymore. In 1979, the introduction of the 3-point shot somehow gave the Davids in the hardcourt a fighting chance to make a dent in this game of giants. In an effort to keep the game from becoming a wrestling match inside the paint, the outside shot from way beyond the shaded lane was given more value. This would spread out the defense and provide a new facet in the game, thus making it even more interesting and more enjoyable for the fans.

The 3-point bomb became a game-changer. Suddenly, a 6-point lead in the last seconds of play was no longer insurmountable. Leads of 4 to 6 became a mere ‘2-possession’ ballgame that could still be challenged. Smaller, yet more agile snipers were then enlisted to make a living detonating occasional 3-point artillery bombs from beyond.

However, in those early days of the 3-pointer, the intent of the shot was mainly to keep the defense from double or triple-teaming their centers. Priority for the offense still remained focused on the shorter stabs. Even with the arrival of smaller, more agile stars like Magic Johnson, Larry Bird, Michael Jordan and Kobe Bryant, the closer 2-point shots were still very much favored. But if the interior defense was tight, then the outside forays would be used to loosen up the defense.

Over the years however, players became bigger, stronger, faster and better. The world would marvel at designated hitters who were given the go-signal to fire at will. In the international scene, South Korea would create a minor shock when its smaller crew cut down a heavily-favored Chinese team in the 2002 Asian Games, using the 3-points as its weapon of choice. Here in the Philippines, Allan ‘The Triggerman’ Caidic would regale us with his exquisite sniping. The three-point shot became more and more popular, although the vast majority of the shots were still taken from close range.

In 2013, Steph’s 272 boomers eclipsed Ray Allen’s 11-year season record of 269 treys. Many cage fans took notice. As if to further prove a point, Steph outdid himself by burying a whopping 402 treys in 2016, while his partner, Klay Thompson, hit 276, literally demolishing traditional views of the 3-pointer. The Splash Brothers’ relentless barrage of threebies – delivered at an eye-popping 44.1% accuracy rate – was so devastating, there was now a growing realization that the 3-point range wasn’t that distant and difficult after all.

Following Golden State’s bold lead, the more adventurous coaches were now drawing up more new plays, more new strategies utilizing the 3-point bomb. What came as a pleasant surprise was that there wasn’t much of a difference in the shooting percentage. The 3-point shot had finally arrived.

Steph and Klay’s double-barrel assault at the 3-point record would have dramatic effects on the game. In one of the most memorable NCAA Finals of late, Villanova defeated North Carolina 77-74 in the NCAA 2016 in a game that saw both teams rely on the 3-point shot in the last seconds of play.

North Carolina had earlier rallied from a huge deficit, mainly through an assault anchored on the 3-point shot. Capping their heroic rally with 12 seconds left, they had tied the score at 74-all with another acrobatic 3-pointer with time down to 5 ticks, sending the sold-out arena in an uproar.

Inbounding from the end-zone, Villanova’s point guard raced downcourt full speed. Everyone expected him to go for a hard drive, or look for his big man on a screen play at the shaded lane. Surprise, surprise. He lures everyone with a drive-and-draw, returns the ball to his trailing inbounder, who then buries an incredible buzzer-beater-of-a-trey from top of the key with less than a second left. The crowd is stunned. Half the arena jumps for joy. The other half dies.

Finally, the 3-point shot is no longer regarded as a last resort. Even in a situation where a 2 -point shot would suffice, the trey has become a good option. Our basketball world continues to evolve, thanks to Golden State, and their bold and innovative Steph and Klay.

Andy and I miss Dougy

Losprojm is a creator of content, arts and videos.