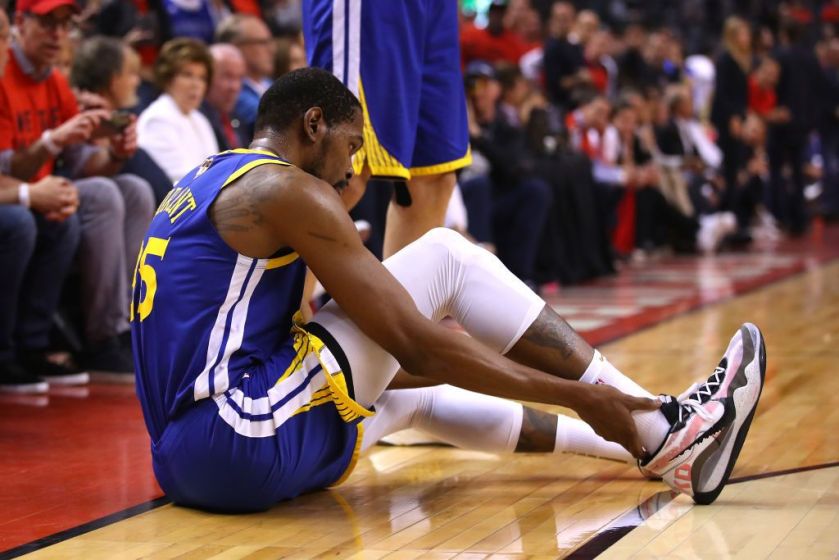 Kevin Durant made a heroic performance last night, playing 12 precious minutes, and scoring 11 points in Game 5 of this year’s NBA Finals. Kevin’s contribution was so vital despite his abbreviated stint, considering the final score of 106-105. At the time of his injury, the Warriors were ahead by 6 points. The 6-point cushion he helped build up was just enough to keep the Raptors at bay, as the Raptors were only able to cut down 5 points the rest of the way.

But then they lose him after he suffers an achilles injury.

Like a grizzled soldier, Durant felt the need to go to battle – considering the 3-1 hole the Warriors were into. He knew he wasn’t 100% fit to play. He knew that there was a great risk of aggravating the injury. He knew the risk to his welfare and the future of his career. He was aware of the free agency circus soon to come. He knew he could play safe – nay, he knew he needed to play safe – in order to max his moves during the off season. He was aware of the many voices telling him not to play. A lot of people knowledgeable about sports injuries had cautioned him about the risks involved. In an earlier article, I too had said that Kevin Durant should play only if he was 100% fit. (Read: To Play or Not To Play: Durant’s Damning Dilemma)

Yet he decided to soldier on and play.

Like a wounded soldier checking out of the hospital, he wanted to be back at the frontlines. For his brothers in the Warriors uniform. For the Golden State organization, and the Warrior fans. For the prestige of winning the crown and doing a 3-peat. It was the camaraderie amongst brothers, the responsibility to the fans, the pride and prestige, all these made him take that difficult decision and look the other way.

And I applaud him for that. Durant – despite the risks – was willing to sacrifice life and limb, that the Warriors might live to fight another day. The true-blue warrior that he was, he wanted to gut it out, and not stay in the comforts of safe choices.

Durant rallied his team, and provided the inspiration for them to fight like the true champs they were. Those 12 minutes he contributed inside the court were precious nuggets of borrowed time. A fighter to the last, he knew that this was kill-or-be-killed time, and he would have nothing but to be there with his brothers-in-arms.

As for the Warriors management, there are certainly a lot of questions that must be answered. They could have stopped him from making that fateful decision to play. They could have saved Kevin from himself. They knew the extent of his injury. That said, why did they allow him to play – regardless of whether he signed up for it? Why was he given too much load immediately (12 of 14 minutes playing period)? Weren’t they supposed to be sensitive to the fact that he had not played for quite a while? Was it greed? Was it power and prestige? Was the NBA title the ultimate prize? At the risk of their player’s welfare? The scientific determination of whether a fighter is fit to fight will ultimately rest with management. They could have put their foot down on this. But they didn’t.

(For a closer look, just click on the pic.)