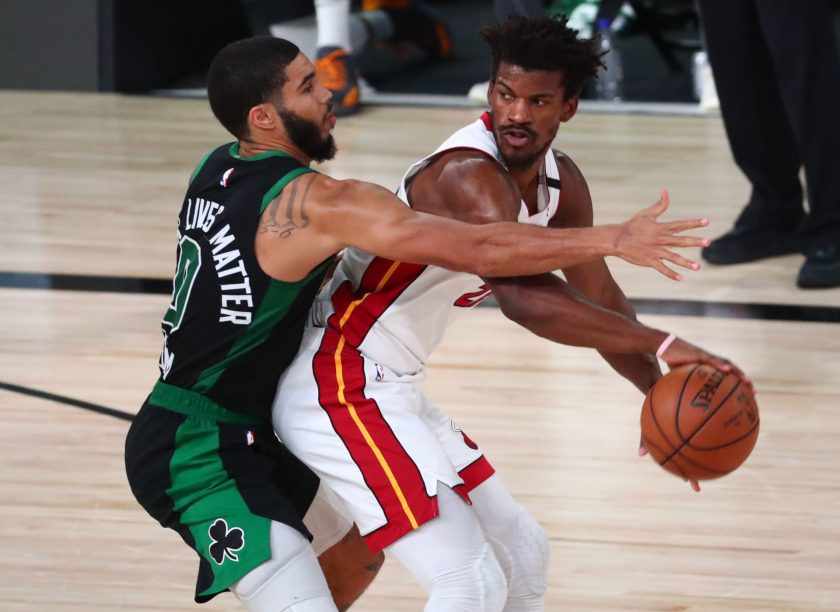 It ain’t over till it’s over.

The Boston Celtics whacked the Miami Heat 121-108 to stay alive 2-3 in the NBA Eastern Conference this season. The game was played in spurts, with both teams at different points clustering bombs and throwing wicked haymakers. But in the end, it was the Celtics’ pride and dogged determination that won out.

Miami had earlier shown a propensity for taking the close games, winning by margins of 3 (Game 1 in double overtime), 5 (Game 2) and 3 (Game 4); while the Celtics took care of Game 3 by 11 points in the only lopsided game so far in their series. However, with Jayson Tatum, Jaylen Brown and Kemba Walker leading this uprising, the Celtics’ sense of urgency staved off elimination. Trailing 51-58 at the half, the Celtics pounced on the Heat’s listless offense and poor defense in the third quarter to gain the momentum.

The Celtics produced balanced scoring from their 5 starters, with Daniel Theis using his inside smarts to befuddle the Heat defense. Theis may not be as athletic as his Miami counterpart, Bam Adebayo, but his talent for positioning and hustling on the court created scoring opportunities for the team. Once the Celtics found the groove, the tide turned in favor of the Celtics. The lead started ballooning. The confidence in their shots followed, and the fluid movements in both offense and defense rolled in. And if the Heat don’t find an antidote for this in Game 6, the momentum could change in favor of the Celtics.

It didn’t help that the Heat were saddled with fouls right from the start. Jimmy Butler and Tyler Herro played lesser minutes due to early foul trouble. Then the Heat lost their top scorer, Goran Dragic, to fouls in the 4th quarter, further dousing their chances for a late rally.

Also crucial were the great effort from the likes of Marcus Smart, Gordon Hayward and the rest of the Celtic crew. This was a total team effort, indisputably justifying the right move to unload some big stars and limiting playing time to a more manageable core group. It will be recalled that the Boston Celtics had an infinitely more fearsome line-up last year that included the likes of all-stars Kyrie Irving and Al Horford, plus other standouts like Terry Rozier, Marcus Morris and Aron Baynes. Despite having to unload 5 of the team’s best players, the team has shown resilience, plus a much-better cohesion. Coach Brad Stevens has to be credited for having achieved far more this year with less talent on the ground. And it all starts with better teamwork.

The arrival of Kemba Walker, the unassuming yet clearly more team-oriented point guard from Charlotte, paved the way to the further development of Jayson Tatum and Jaylen Brown. Tatum’s all-star status and Brown’s selection to the US National team last year are manifestations of the continued development of this young duo. What the flashy Kyrie failed to do, the blue-collar Kemba achieved. All this, of course, with the guidance of coach Brad.

Coach Brad has taken the game to a higher level, battling an equally-cerebral coach Eric Spoelstra in a virtual cage chess match. He has been the perfect coach for this young dynamic team. Clearly, the team has upgraded its game from the purely physical to the higher, more intellectual level. Still, the Celtics need a win in Game 6 in order to shift momentum back to their side. How will they do it? Expect coach Brad to come up with a surprise of his own.