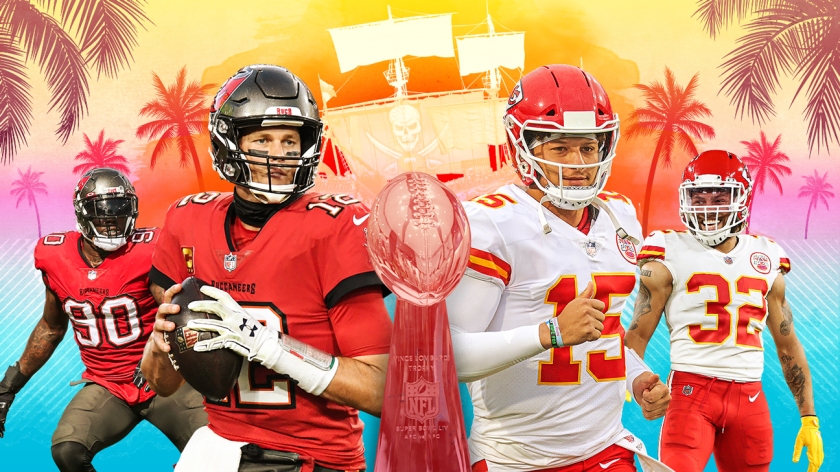 Yes, Super Bowl 2021 is upon us!!! This Sunday night (Monday 7:30 am, Philippine time), American football – arguably the most popular sport in the United States – will feature its 55th championship in Tampa, Florida.

It will be the defending champions Kansas City Chiefs versus the Tampa Bay Buccaneers, a wildcard team that barely made the playoffs, and has had a losing record in the 3 prior seasons. The favored Chiefs had a league-leading 14-2 record in the regular season, while the Bucs struggled with a respectable 11-5 record, barely making the playoffs.

However, the Bucs have a rare homefield advantage, with the game being played in Tampa’s Raymond James Stadium. The rights to the Super Bowl were awarded to the city way back in 2017. Prior to this game, no other city has ever hosted a Super Bowl with its team playing for the championship. This will be the first-time ever for a Super Bowl to be played in a city with its own team contending. This could give the Bucs a slight edge. Plus, the Bucs have a new-found confidence and a developing winning culture, with the acquisition of a known winner in quarterback Tom Brady.

The 2 teams took different paths on the road to the championship. The Bucs had to play an extra ‘wildcard’ game to start the playoffs. The Chiefs, owing to their impeccable record, drew a bye. The Bucs then took 2 more surprising wins on the road, the last against the top-seed Green Bay Packers, to win the NFC title and book a Cinderella slot in the Super Bowl. The Chiefs, on the other hand, steamrollered their way back to the AFC title, starring Travis Kelce and Tyreek Hill on the receiving end.

But the biggest storyline for this Super Bowl will have to be the match-up between 2 superstar quarterbacks: Patrick Mahomes for the Chiefs against Tom Brady for the Bucs. This has got to be the best QB match-up ever in the Super Bowl.

Mahomes, at 25 years of age, is already considered the face of American football today, the Lebron James of the gridiron. He is the youngest ever to have clinched the Super Bowl MVP after the Chiefs won it last year. An all-around athlete in his college days, he was almost drafted by baseball’s Detroit Tigers before he decided to focus on football. In just 4 years in professional football, he now has 1 Super bowl ring, with an MVP to boot, and a strong chance to do a repeat this year.

Tom Brady, all of 43 years, is considered by many as football’s Greatest-of-All-Time (GOAT). He has logged 21 years in the National Football League (NFL), the first 20 of which were with the New England Patriots (2000-2019), before he transferred to Tampa this season. With 6 Super Bowl rings out of 9 appearances, plus 4 Super Bowl MVPs to his credit, he was mainly responsible for the creation of the Patriots’ 2-decade dynasty in the sport. In just 1 year in Tampa, he has brought this unheralded team to the Super Bowl, an awesome feat in itself. He is considered the Michael Jordan of football.

Mahomes’ Chiefs will be gunning for their second straight Super Bowl. The last time this feat was accomplished was in 2003 and 2004 when Brady’s Patriots annexed 2 crowns. The Chiefs are trying to be – and have all the ingredients to be – football’s next dynasty, something that Brady’s Patriots used to be.

Mahomes has a lone Super Bowl ring so far. Still, with his speed and footwork, his strong throwing arm, and his uncanny football IQ, not to mention a star-studded cast in the Chiefs’ roster, he definitely is a cinch to make more Super Bowl appearances in the future.

Brady, on the other hand, will be shooting for his 7th Super Bowl ring, a record in itself; and his first with a team other than the New England Patriots. With 6 championships under his belt, he already has the most rings in the NFL; adding a 7th will make his record almost untouchable.

This Super Bowl match-up then is between pro football’s best-ever quarterback versus today’s best QB; a duel between the 6-time champion versus the reigning champion. This is like a clash between Michael Jordan and Lebron James for the NBA championship, something that basketball fans never got to see.

Both teams boast of numerous talents in their offensive and defensive lines, although the Chiefs have the younger, and brighter stars in their line-up. Injuries and the COVID protocol will also play a role come gametime.

Patrick Mahomes and the Kansas City Chiefs are favored to repeat as NFL Champs this year. They are prohibitive +3 betting line favorites. But some oldies are rooting for the underdog Tom Brady to work his old magic once again on the gridiron. Mahomes is eager to stamp his class; Brady wants to show he’s not done yet.

It’s youth against experience. It’s speed versus smarts. It’s the present versus the past. Will the present finally bury the past? Or will the past come to haunt the present? The head guys – those who love their statistics and their data analytics – will go for Mahomes and the Chiefs; the heart guys – those sentimentalists who care more about gut feel and great storylines – will go with Brady and the Bucs. Will you go with your head? Or with your heart?

Come and watch the NFL Super Bowl this Sunday (7am Monday here in the Philippines). Bring out your popcorn, bring out the beer. Watch the Chiefs shimmy, see the Bucs rock.

As Michael Buffer would say: “Tonight, we are going to witness the most anticipated match in the history of professional football. For the professional football championship of the NFL and of the wooooorrrrld….. are you reeeady???? For the thousands in attendance, for the millions watching around the world, from sunny Tampa in Florida, ladies and gentlemen, LET’S GET READY TO RUMBBBBBLLEEEE!!!”