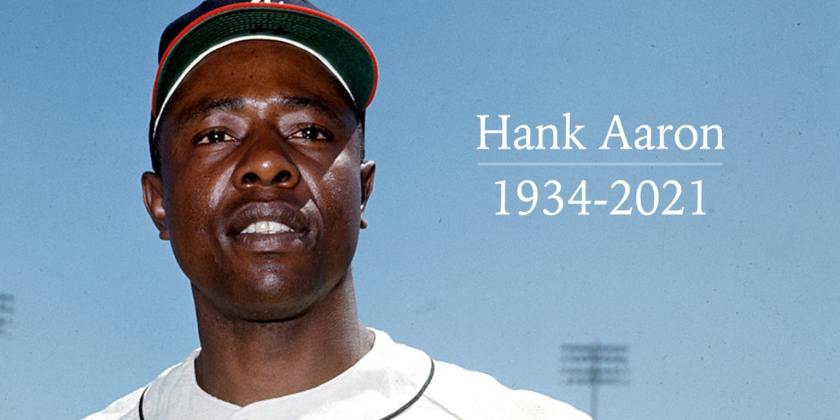 Hammerin’ Hank Aaron, baseball legend and civil rights activist, passed away last Friday at 83 years of age. He died peacefully in his sleep.

When I started following sports events decades ago, certain names would jump out of the sports page quite regularly, regaling me with exciting stories of passion, hard work and pure love of the game. These sports legends provided me with the inspiration to strive hard in order to achieve victory and succeed against life’s many challenges. In boxing, there was Muhammad Ali, whose colorful quotes and snazzy boxing prowess captured the imagination of the general public. In basketball, we had among others the likes of Bill Russell and Wilt Chamberlain, with different styles and personalities. In baseball, one of the guys I so loved to read about was Hank Aaron.

A silent, yet solid performer, Hank Aaron kept hammering his bat year after year after year for the Atlanta Braves. Unfazed with having to work with a not-so-illustrious line-up with the Braves, he waded in like a pug-nosed brawler, occasionally stealing wins with his huge homers and his exemplary defense.

On April 8, 1974, Hammering Hank swung his bat for the nth time to break Babe Ruth’s homerun record of 714 before a sellout crowd. He was all of 40 years old by then, with 21 years of noble service to baseball’s major league. He would stay on for another 2 years before finally calling it a career. By the time he bid the game adieu, he had amassed 755 homers, and was among the all-time leaders in hits and in so many other statistics in the game. Aaron still holds the major league records for runs batted in (2,297), extra-base hits and total bases. He was also MVP in 1957, when his Braves – then playing out of Milwaukee – won the World Series against the New York Yankees in 7 thrilling games.

His record of 755 homeruns would be surpassed 33 years later in 2007 by Barry Bonds. But with the controversy of steroids tainting the achievement, most people still regard Hammerin’ Hank as baseball’s last legitimate homerun champion.

Henry Louis Aaron was born the 3rd of 8 kids to an impoverished black couple in Alabama. As a young boy, he experienced the racism and bigotry that would continue to hound him even as he climbed the ladder of success. He would show a single-mindedness that would bring him to the fledgling Negro League in 1951, before the Milwaukee Braves would finally come knocking on his door in 1954.

Babe Ruth’s erstwhile perceived unbreakable record of 714 homers had stood since 1927. As Hank closed in on this statistic in the final years of his career, he would receive hurtful slurs, lots of hate mail and even death threats, as protectionists within the white community moved to put more pressure against him. He finished the 1973 season with 713 homers, just one shy of tying Babe Ruth’s record. The long winter that followed added more thrill and excitement as people eagerly awaited when that fateful slam would finally come. When the record was broken, Hammerin’ Hank felt exhausted, yet relieved, as if a huge load had finally been taken off his shoulders.

Despite all these trials to his road to baseball fame, Hank maintained a stoic dignity and pride as a person. He was never loud, but his actions would always speak volumes of inner strength and integrity. After breaking the record, he trudged on for 2 more seasons. He was a big attraction wherever his team played. But clearly, there appeared no more record worthy of the chase, no more compelling challenge out there to whet his appetite. He lent his name to the civil rights movement, busied himself with efforts to uplift the community, and moved on with his life.

But little did he know that he had touched the lives of millions, inspiring those who have less in life, and setting a proud example of quiet dignity, grim determination and inner fortitude. Unbeknownst to him, people from across the world were rooting for him, and were learning and achieving their dreams because of the fine example he so effortlessly demonstrated.

Hank Aaron. I shall remember you, sir, for all the dreams of sports glory, and all the lessons in life you gifted me as a young kid. My salute to you.