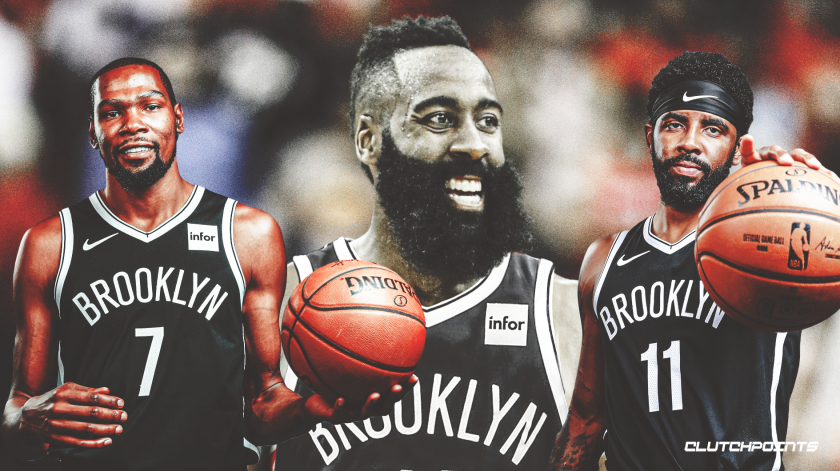 This has got to be the biggest bombshell ever to rock this year’s NBA season! James Harden – aka the Beard, the erstwhile face of the Houston Rockets, a former season MVP and 3-time season scoring champion – has left Houston to land a coveted spot with the Brooklyn Nets.

Already perceived as a strong contender for this year’s NBA title, the Nets’ have gone all-in with the acquisition of the prolific, yet enigmatic scorer. Now reunited with Kevin Durant, himself a 2-time Finals MVP and 4-time scoring champion; and crowd favorite Kyrie Irving, himself another virtuoso scorer and NBA champ as well, Harden makes the Nets the instant favorites to take the Eastern conference over such heavyweights as the Sixers, the Celtics, the Bucks and the Heat. The addition of the Bearded One has undoubtedly made the Nets the most likely dance partners for the Lakers in this year’s NBA Finals, if all goes well.

But then, there is that big IF.

There are certainly a lot of questions that will need to be addressed first before we even talk about letting these 3 magnificent warriors loose in the hardcourt. Avid cage fans are eager to know if this trio of stars will stick together. Will this band of talented isolation specialists be able to work together without stunting the usage of the others? In the event of a last second shot, who gets the ball? In the hierarchy of stars, who gets top billing? Who is number 2? And who will go down to play the lowly third spot? (Lowly third spot? How can being number 3 in the roster be considered lowly?) Will Numbers 2 and 3 be willing to take that humbling step back after having been top dog in their past teams? Will there be enough balls for this talented bunch? Are they willing to make some sacrifices to make the team the best in the league? Was this monumental move by the Nets triggered by the sudden mysterious departure of Kyrie after a brilliant opening? Or was it the other way around: was Kyrie’s unexplained absence triggered by the impending arrival of the Bearded One?

What is evident at this point is that – despite the credentials and the overflowing talent – all is not well in the Nets’ locker room. And it will take a super effort – and a lot of sacrifice from all sides – to successfully traverse this emotional minefield that threatens to blow up the Nets’ locker room.

Kevin Durant is known to have lobbied for the Harden trade, and certain quarters say that this did not bode well for Kyrie. Kevin and James used to play together in Oklahoma, but this was during a time when James had not yet developed into the star he is today. In his successful, yet brief stint with the Golden State Warriors, Kevin demonstrated he could make some sacrifices for the good of the team, taking fewer shots, and also taking relatively lesser pay. How much is he willing to sacrifice in order to bring his new team to the promised land?

James Harden, on the other hand, forced his way out of the Houston Rockets. With the Rockets, he had numerous chances to team up with other big stars such as Chris Paul, Russell Westbrook, Carmelo Anthony and Dwight Howard, but these partnerships never seemed to work. He was the face of the franchise in Houston. Will James eventually bend a knee to Kevin as the team’s main man? Will he be willing to make some sacrifices to erase that tarnished reputation he developed with the Rockets?

Kyrie Irving used to be top dog for the Cleveland Cavaliers before Lebron’s celebrated return from Miami. He won an NBA ring with Lebron, then left for Boston in a quest to show the world he could lead a team to the championship. A bust with the Celtics, he then moved to the Nets to try a partnership with Kevin. Without the injured Kevin last year, he could not make the Nets truly competitive. With Kevin at the start of this season, Kyrie showed how strong this team could be. With the arrival of James, will Kyrie be willing to reduce his ball-touches? Having been top dog in a team thrice before (Cleveland pre-LBJ return, Boston and Brooklyn last year), will he be willing to step down again?

Steve Nash is a rookie coach. A cinch for the Hall of Fame, and himself a point guard during his playing days, Nash was supposed to know how to best utilize the talented Kyrie. But then, it was reported that Kyrie was not too happy with the designation of Nash as head coach. How will he handle this trio of stars?

Mike D’Antoni is the assistant coach. He used to be Harden’s coach with the Rockets. Mike should be in a perfect position to handle the mercurial Harden. However, hindsight tells us Mike was also partly responsible for giving Harden too much of the diva treatment in Houston. How will Mike help to change the environment within?

The best case scenario for the Nets right now would be for Kyrie to learn to accept the role as the third wheel, and James the second wheel. If both players embrace that, then the team has a better than good chance to make it as champions. The talent level of these 3 will make it the top trio in the league by far. If James and Kyrie accept their respective roles, no team will be able to handle the Nets, even as their defense may appear suspect at times. The good karma, borne out of the demonstrated unselfish giving and sharing, will bring this team the NBA Championship.

The worst case scenario would be if Kyrie or James do not accept their positions in this new super line-up. In which case, the team implodes. At the end of the day, there will yet be another blockbuster trade that will force another exit, another trade. In an unclear hierarchy of stars, the resultant bad karma will simply find a way to expel the unwanted, the difficult one.

History has shown us what good and bad team chemistry can lead to. Only recently, we saw how the LA Clippers bombed out despite having a line-up oozing with talent. In the not-so-recent Golden State Warriors era, we saw how Steph Curry, Klay Thompson and Kevin Durant all made some sacrifices to ensure the team’s success. In the Chicago Bulls dynasty of old, we saw how Michael Jordan, Scottie Pippen and the mercurial Dennis Rodman epitomized a clear hierarchy among stars, paving the way to a focused and united approach to the singular goal of winning the championship.

The dilemma the Nets face now needs to be resolved soonest. It takes time for a team to jell. It takes time together, on and off the court, for cohesion to be achieved. Coach Nash and his coaching staff, together with Kevin Durant and the rest of the players; they will have to make time to make things work. They will have to be willing to make those sacrifices, and embrace the team’s goal.

Will they see that overall goal of winning the crown? Will they be willing to sacrifice their individual goals for the overall goal? Will they fit well together? We can only wait and see.