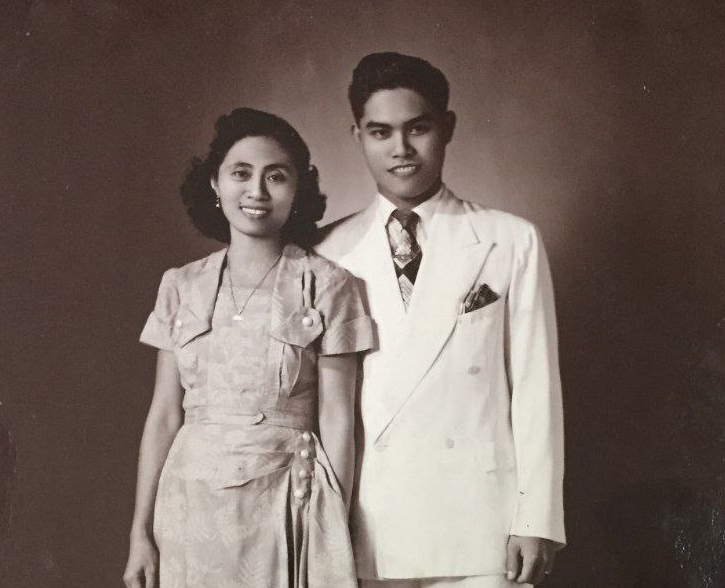 (Boy meets girl. They fall in love. They encounter some obstacles along the way. But they stick it out. And they live happily ever after. You know the drill, right? But no, this story’s a whole lot different. And it’s certainly one for the movies.)

It was a few years after the big war of the 40s, in a far-off island of Bohol, in Central Philippines. There lived a middle-aged lady who had been widowed during the war. Fiercely determined to bring up her 3 young kids in the best way she could, Charing steeled her nerves and stood out among the predominantly-male business crowd in the then-sleepy town of Tagbilaran.

With her hard-earned savings and a little help from her relatives, Charing was able to build a 3-story building in a town eager to rebuild after the hard life brought by the war. She took pride in having built the building. It would become one of the prestigious fixtures in a community that was slowly growing. The ground floor, she rented out as commercial office space; on the second floor, she built small studio-type apartments; while the 3rd floor became her own living space for the growing kids. Life then was simple for her and the family, as she toiled diligently with her daily routine.

One day, a young fellow from the neighboring island of Cebu came to rent a small room on the 2nd floor. Paul was a new-hire for the insurance company occupying part of the ground floor. He had left Cebu with a devastated heart, having lost his sweetheart only recently. The lady had been abducted, and later, forced to marry her abductor to save face. This was the convenient solution offered in cases like this then, as the offending party came from a very popular and influential family in Cebu.

To rid his mind of the devastation of a love gone wrong, Paul was convinced by family members to find his fortune elsewhere. And so, he travelled to neighboring Bohol, to forget about the tragedy that was his love story. Bohol would take him away from the trauma of a lost love in Cebu, yet still be near enough for him to travel back in the event he needed to be with his old folks.

Charing had a bunch of older, more-accomplished suitors then. They would lavish her and the kids with extravagant gifts. Despite her being a widow, she was still a popular ‘catch’ for the menfolk in Bohol. In fact, she had well-to-do suitors coming from the neighboring islands. For she was a looker too – having been crowned Miss Bohol during her younger years. But she wasn’t really looking for love at that time. For she simply had so much on her plate to think of romance and all.

Paul, on the other hand, was just a young employee, with nothing going for him but his regular work in the office. He was a virtual nobody, except for the promising job, the helpful nature, and the easy grin.

But Paul slowly developed a quiet respect and admiration for Charing for the way she kept the family upright. She was balancing her time with the family’s businesses, while raising three growing teenage kids in that post-war environment, and providing wise guidance as the eldest in an orphaned family with 4 younger brothers. And she was doing a splendid job of keeping everything in order. She was never given the opportunity to finish college, as it was a common practice during those times not to give priority to girls’ education. It was not considered important for girls to be properly schooled as they would eventually become mere ‘housekeepers’ anyway. Despite this disadvantage, she managed to teach herself well; and her Solomonic wisdom was always followed and respected by her younger, better-schooled siblings. Apart from that bigger family, she would impose a strict regimen on her own young kids, making sure that their education was a priority.

This unselfish devotion to family, this work ethic, her strong devotion to God, and yes, her simplicity, her beauty – these were just some of the things that impressed Paul about this lady who, incidentally, was 13 years his senior.

And so, he was slowly swept. And he started seeing and talking to her more often. A lucky break for him was that he didn’t need to travel far to visit her, nor did he need an excuse to make small banter, as he was living just a floor below.

However, things would become quite difficult when Paul started courting her. For one, that age difference of 13 years was a big no-no during those days, especially in a small town where everyone knew everyone else. Suddenly, everyone was against him. The kids didn’t approve of him. So did Charing’s overprotective brothers and relatives. The entire community was also against him, being an outsider from insular Cebu. In fact, even Paul’s folks in Cebu disapproved of his choice, owing to the age difference and his status being still ‘on-the-rebound’ from that lost love. It seemed that the opposition was everywhere, with no one willing to take the cudgels for them. It seemed like it was just the two of them against the world.

But Paul persisted. And Charing found herself slowly being won over by his quiet charm. And against all odds, she would finally put her foot down. Charing was in love again. To a young guy THIRTEEN years her junior. To an outsider from loud, aggressive Cebu. To an unknown entity whose roots she didn’t know much about. She was a cougar, long before the term was coined. But she was ready to face the gossip, the ridicule, the backbites and all the negativity. She was ready to walk down the aisle once again.

Her folks were up in arms. Did she not consider how it would look like as she got older, with a young husband by her side? Didn’t she hear the resounding disapproval from the community? What did she know about his background in Cebu? Why not choose a local, older, ‘known’ entity, of which there were many to choose from in Tagbilaran?

It would take a lot of patience and a whole lot of resolve for Paul and Charing to convince their naysayers of their genuine devotion and love for one another. First, in a mild, patient manner. But when the wave of opposition grew bigger and bigger, Charing showed true grit and strong character, putting her foot down and fending off all detractors. And they prevailed. And they got married. Finally.

It has been 72 years since they took their vows. Paul and Charing weathered all the challenges. They would later add 2 more boys to the original brood of 3: my elder brother Paul Jr and myself.

My Papa Paul died in 1999, much earlier than my Mama Charing who died in 2005. Their union lasted all of 49 fruitful years. Their journey was not always rosy, but Papa and Mama weathered the storms together. They held on to each other, taking comfort and strength in their unwavering religious bond.

Today, I wish to look back and honor them, for all the blessings their union has brought us – their children – as well as our children, our relatives on both Papa’s and Mama’s side, their friends and communities. Up till now, I still encounter different people, some unknown, who would regale me with stories of my Papa and Mama. Of the positive influence Papa and Mama had been to them. Of the many selfless acts of kindness Papa and Mama had blessed them with. Of how strong their love was to have survived the strong opposition during those early days.

And I shall honor their memory by continuing their love for the land and their urban forest vision right in the middle of Tagbilaran. This lush sea of green amidst the urban grey fixtures of the city will be our shared legacy inspired by Papa and Mama. We are now creating an urban food forest – our humble contribution to their dreams – to help in food security, increase biodiversity, improve the air quality and provide educational opportunities for the youth of Tagbilaran. But that will be another topic for another day.

To my Papa and Mama, your noble deeds and shining example of love and devotion shall never be forgotten. This one’s for you.

Join 3,487 other subscribers
Follow Color My World on WordPress.com