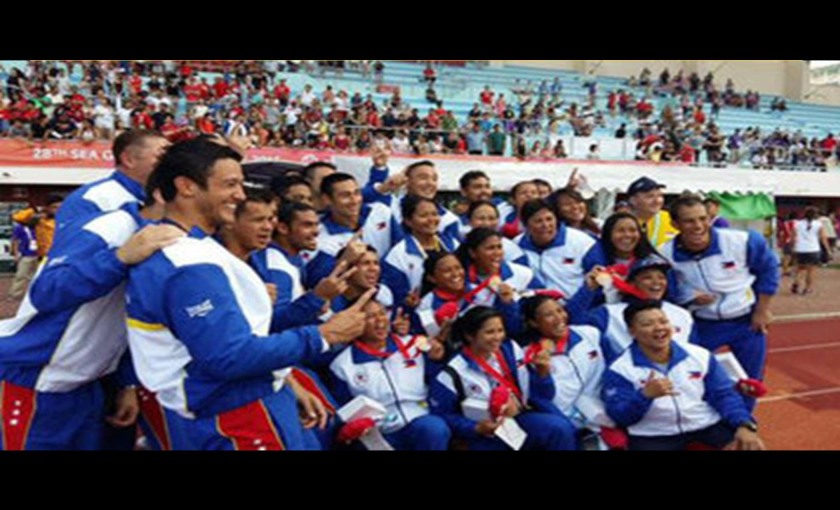 Nothing’s changed. After the Philippines’ dismal performance in Nay Pyi Taw, Myanmar during the 27th South East Asian (SEA) Games last 2013, our contingent returns home from the 28th edition of the SEA Games in Singapore minus a favorable result once again.

Our athletes landed 6th overall in Singapore with a tally of 29 Gold, 36 Silver and 66 Bronze medals, a slight improvement from the 7th place finish in 2013 in Myanmar where we also had 29 Gs, but only 34 Ss and 38 Bs. The jump from 6th to 7th was largely on account of Myanmar’s plummeting fortunes from having a host country’s bonanza of medals in 2013, to an ordinary competitor .

Prior to jumping off to do battle in Singapore, our sports leaders trumpeted a projected output of 41 to 50 golds. Not surprisingly, they were way off the mark.

Here are the medal standings for the last SEA Games:

Singapore, with a population of only 5.4 million people, beat the Philippines, a country with over 100 million people, for the third straight time in the medal tally. Since the 2011 Games in Palembang, the Philippines has logged behind Singapore by at least five gold medals. Sure, Singapore was due for an avalanche of additional medals, as hosts of the Games. But the difference in medal output is simply appalling.

Malaysia has a population of only 30 million. It has consistently outscored the Philippines in the medal tally since 2005. So with Thailand with a population of 67 million.

In Singapore, we failed to win a single event in 51 gold medals at stake in aquatics (38 in swimming, 8 in diving, 3 in synchronized swimming and two in water polo). It is simply unthinkable for a country surrounded by water not to win a single gold in aquatics.

We were previous world champions and current record holders in three showcase events in dragon boat (traditional boat race), and yet we didn’t win a single gold (there were eight gold medals offered) in the event.

We also failed to win any of the 17 golds in canoeing. We only scored four bronze medals.

In athletics, we won 5 golds. However, 4 of these came from Fil-Ams based in the USA. This clearly illustrates that the grassroots development program for track and field is practically non-existent, unlike the times we had the likes of Lydia De Vega, Isidro Del Prado and Elma Muros in the Gintong Alay program.

All sports failed to meet their medal predictions, except for triathlon, boxing, taekwondo, table tennis, softball, billiards, rugby 7s and basketball. The Philippines participated in 35 of the 36 sports in Singapore.

Chef de mission Julian Camacho initially predicted 50 gold medals, then lowered his expectations to 41 in a bid to match the country’s gold output in 2007 Thailand. He later thanked the athletes for doing a good job after bringing home only 29 gold medals, the exact same output in 2013 in Myanmar, but with more athletes competing this time.

Here is the Philippines medal tally by sport in the 28th SEA Games:

POC Vice President and Volleyball Head Joey Romasanta ventured that there is a lesson to be learned from the medal standings. He said that we should concentrate on medal-rich events such as aquatics, athletics, canoeing, boxing, etc. to score high in the medal race. This is not a lesson learned, but rather a lesson unlearned as this has been a known fact since the early days of the Olympics. To say now that we should start to focus on these events is to actually say that we have not learned these lessons from long ago.

PSC chairman Richie Garcia said that there is a need to entice coaches to go full time on training the national athletes. Most coaches, he said, do odd jobs on the side, like coaching and training collegiate athletes and teaching kids. Garcia said the coaches produce the athletes so they should be paid better in order for them to stay. Case in point is the former track icon Lydia de Vega who now works in Singapore as a college coach. Again, this is nothing new. Everybody knows that to get quality performance, we need quality coaches. And quality coaches need quality incentives.

Garcia further added that our athletes performed well in some and had narrow defeats that could had been won. He earlier predicted a sixth overall finish without the number of gold medals. He decried the lack of foreign training opportunities for the coaches and the athletes as the bane in Philippine sports. Nothing new again. If we want our athletes to learn and grow in their respective fields, give them more opportunities to pit talents and bloody their noses in international competitions and training.

POC president Peping Cojuangco Jr said the national athletes should be housed in a training center where everything is controlled and strictly monitored— diet, conditioning, mind-set and training. He hopes to build the training center in Clark Air Base, Pampanga (projected to cost around P2 billion) as soon as possible. Again, this has been articulated a million times before. Gintong Alay’s successful program had our athletes train in Baguio, where the thin air helped their lungs develop the capacity to acquire more oxygen, hence more stamina. We don’t have to re-invent the wheel here.

Cojuangco also mentioned that athletes from other countries such as Thailand, Singapore, Vietnam, Indonesia and even Malaysia got ample financial support from the government. He said these countries spent at least five times the money that the Philippines had invested on its athletes. This is the same song, with the same refrain all over again. And no one has done anything about it.

But other than that, there is a glaring lack of a grassroots development program for many of our sports associations. This is evident in the lack of quality performance, the lack of publicity and excitement generated from our Palarong Pambansa or other national sports competitions of the recent past.

There is the growing popularity of taking short cuts, of mining for gold opportunities among Fil-foreigners, instead of developing our native talents. It is apparently more fun for officials to look for talents abroad, than to find diamonds in the rough in the hinterlands of Mindanao or elsewhere.

Many of our National Sports Associations (NSAs) have not demonstrated the initiative and creativity to find other sources of support for their athletes. Everyone cries out for lack of resources when there are hundreds of companies that are willing to assist given the right opportunity. Companies will want to be identified with winners, thus an ill-planned program will definitely not get the desired support.

Many of our NSAs have become NPAs (non-performing assets). The medal tally above should tell us which Associations have been napping. These NSAs must be held accountable for their actions (or inactions). If we continue the same programs, the same activities, at the same pace, with the same faces, we are sure to have the same results. New standards, new initiatives, new leadership is needed to inject dynamism, trust and a deeper understanding of the challenges of the new sports environment.

The same should hold true for our POC and PSC. After 2005, we have been consistently underachieving. The broad strokes given by our sports leaders have been the same complaints which they themselves should have addressed long time ago. To say that we are happy with the results is to say that we are happy with mediocrity and dismal performance. That is precisely the kind of attitude that will keep our people mired in the quicksand of failure.

Perhaps it is time to change the old guards. There are passionate leaders who can better address the country’s hemorrhaging sports program. There are young, innovative sportsmen who have a better appreciation for sports in general; new leaders who can shine under the new sports dynamics at the national and international level.

As for the perennial problem of ‘lack of government support’,  it is time for the whole sporting community to make its voice heard. It is clear that the President is not keen on supporting the present POC leadership. What he doesn’t realize is that by withholding support for the POC, he is actually denying support for our athletes, and the country’s sports and youth program.

The country’s leadership must understand the critical role of sports in the development of the nation. The President must wake up to his responsibility to get the wheel moving. Investing in sports among the youth is an important first step in the stairway to success. It makes our people stronger physically, mentally and psychologically. It is a culture changer.

Sports builds the character of our youth. It develops the basics of discipline, sacrifice, professionalism, teamwork, fair play, unity, leadership, etc. These character traits produce the bedrock to success. Success provides the impetus for more support to be poured back into the system. Once that cycle is completed, once the movement has gained momentum, that perennial nuisance called ‘lack of government support’ becomes a thing of the past.

But first we have to take the first step.