Published on April 15, 2016 on http://www.footballforhumanity.org

This is a reblog of an article written by Chris. He and his amazing group of football fanatics are moving around the country spreading the wonderful gospel of football at the grassroots level. Such a noble advocacy that should be wholly supported. 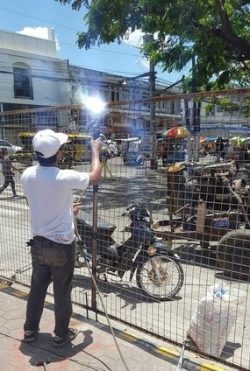 We spent the entire morning putting up the “cage”, making sure it would stand up to both sunshine and rain. Summer is in full swing in Naga, but the walls had hardly come up when children started playing in the enclosure, unmindful of the baking heat of the pavement.

The following day, word had spread around that a football cage has sprouted in the middle of the town and they came from all over, in their colourful jerseys and football shoes, too excited to notice the noise and the smoke coming in from a thousand Jeepneys. People were stopping and noticing, and I could see the special joy from the players who stayed way after the sun had set. We’ve made history, the boys said. We’ve never done this before; we’ve never seen a cage before. My happiness would have been complete, except for a few details that kept tugging at my mind.

There was a tiny, tiny boy who was always around me all those days that I was overseeing the build. I would call him, and automatically, he would run and disappear. He would keep himself a few yards away from the children who were playing around the cage, always careful not to enter the circle. But I would see him kick an imaginary ball, then jump and clap his hands to cheer for himself, as if he had made the best goal of the day.

Then there’s the little girl who peddles spring rolls in the plaza. From morning till night, she carries a basket full of spring rolls, 3 pesos each, and she was probably grateful for the added activity that the cage brought, and her wares disappeared faster, and she could go home earlier. Many times I could see her clutching the cage, giving herself a longer break especially when girls were playing. Yesterday I called her and bought a few rolls so I could talk to her and find out what’s in her heart, when she sees the girls playing. Do you like to play with them? She turns to the cage to watch, big smile on her face, then shakes her head and brings up the bottle of vinegar, as if to tell me that no, I need to finish my quota for the day.

I tell them – come back tomorrow, ok? You’re my friend and I hope to see you with all the other children when they start playing football. And the whole town will watch and cheer!

These are the children who inspire me, and give me the strength to continue doing what I have set out to do. I grieve over the fact that they have both learned to live in the “fringes”, in the margins of society. They have learned not to laugh and play because they think they’re not entitled to. The little boy is always dirty, always just playing on his own and the little girl, I learned, is without a mother. I’m going to teach them, through football, to be children again. To laugh, play, learn how it is to work with a team, learn how to win, how to lose, how to prepare themselves to be better adults. That, again, is the challenge to my team, and we’re going to do it, through the magic of football. 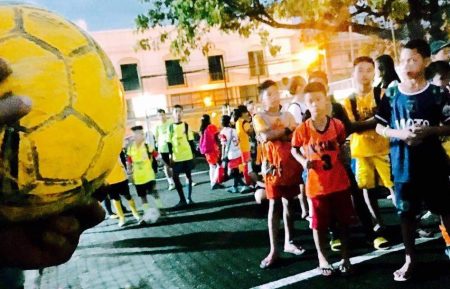